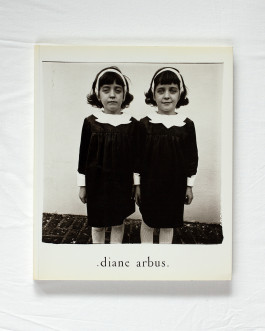 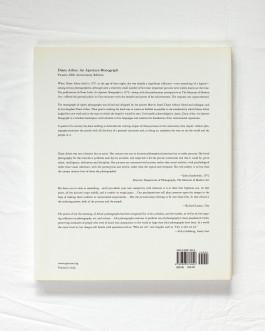 When Diane Arbus died in 1971 at the age of 48, she was already a significant influence—even something of a legend—for serious photographers, although only a relatively small number of her most important pictures were widely known at the time. The publication of Diane Arbus: An Aperture Monograph in 1972—along with the posthumous retrospective at The Museum of Modern Art—offered the general public its first encounter with the breadth and power of her achievements. The response was unprecedented. The monograph, composed of 80 photographs, was edited and designed by the painter Marvin Israel, Diane Arbus’ friend and colleague, and by her daughter Doon Arbus. Their goal in producing the book was to remain as faithful as possible to the standards by which Arbus judged her own work and to the ways in which she hoped it would be seen. Universally acknowledged as a photobook classic, Diane Arbus: An Aperture Monograph is a timeless masterpiece with editions in five languages, and remains the foundation of her international reputation. A quarter of a century has done nothing to diminish the riveting impact of these pictures or the controversy they inspire. Arbus’ photographs penetrate the psyche with all the force of a personal encounter and, in doing so, transform the way we see the world and the people in it.

“Diane Arbus was no a theorist but an artist. Her concern was not to buttress philosophical positions but to make pictures. She loved photography for the miracles it performs each day by accident, and respected it for the precise intentional tool that it could be, given talent, intelligence, dedication and discipline. Her pictures are concerned with private rather than social realities, with psychological rather than visual coherence, with the prototypical and mythic rather than the topical and temporal. Her real subject is no less than the unique interior lives of those she photographed.” —John Szarkowski, 1972, Director, Department of Photography, The Museum of Modern Art

“I have never seen pictured like them before, and I am sure I will never see their equal again. They are the product of something beyond the camera, the result of a long, complex and intensely human process. No one can go into the street tomorrow and take a Diane Arbus photograph. That would be merely adjusting a lens and pressing a button. What made her pictures great was everything that happened before she pressed the button.” —Douglas Davis, Newsweek, 1984

“Diane Arbus is one of our legends, her monograph a pivotal classic that changed the direction of photography in America. She captures the complexity and the art in reality. The quality that defines her work and separates it from almost all other photography is her ability to empathize on a level far beyond language.” —Nan Goldin, Bookforum, 1995