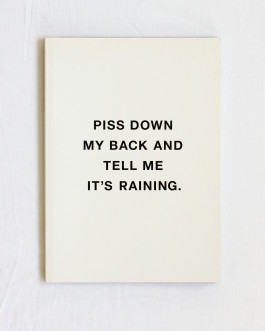 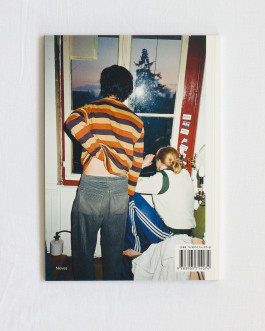 “The pictures in the book “Piss down my back and tell me it’s raining.” where taken during the last four years. They are the crop of a constantly attentive observation of my environment and coincidence. It’s about what you see and how you look at it. There is love, melancholy, beauty, soccer, irony, friendship, adventure, everyday life, humor and the right moment.” —Linus Bill

Linus Bill studied photography at the Zürich University of the Arts. Between 2004 and 2010 he took part in several group- and solo exhibitions in Berlin, Zurich, Hamburg, Stockholm, Vienna and New York. In 2009 he won the Grand Prix Du Jury of the Festival International de Photographie Hyères. Since then Linus Bill has formed an artist duo together with Adrien Horni. They share a studio and work in tandem to produce collaborative works in a variety of media. United by a bold visual language based on color relationships, abstract forms, and fluid compositions, their practice shows a consistent concern with versatility and the communication and realisation of ideas.